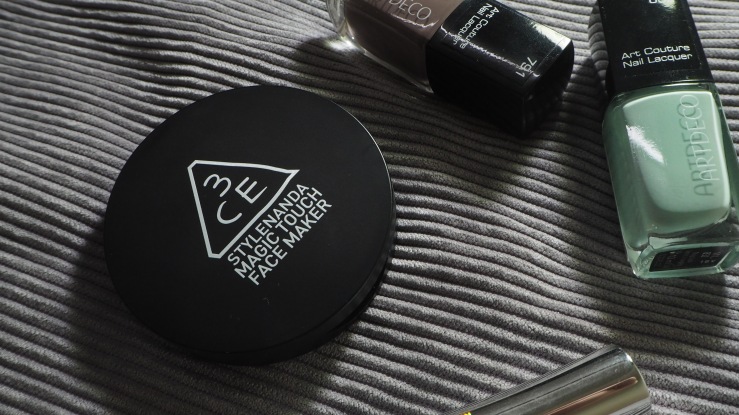 A while ago I talked about the 3CE lip products, and my view of them was that they were mediocre. Which they are. I’ve since given up on those. The lip marker is too sheer to bother with, and the lip crayon is too drying to bother with. So yeah. I still keep them around, but I don’t wear ‘em anymore.

But even back then I said I was probably going to end up buying something else from 3CE. Well lo and behold, I am now a self-fulfilling prophecy because I’m back today with a little review of the 3CE Stylenanda Magic Touch Face Maker!

First, we’ll talk about the packaging (which is probably the ENTIRE reason I continue to purchase from 3CE— although I hate to admit it. I went to business school! [and actually graduated] I KNOW what marketing is!). I guess it is cheap plastic. It’s definitely not luxe in any way. The Pony eyeshadow palette is way more impressive in the packaging department, but that doesn’t mean I don’t like this either. I’m a sucker for simple, clean packaging and I LOVE the whole plain-black-compact-with-just-the-logo on it thing. This definitely ain’t Too Faced, kids.

Anyway, the Face Maker is a contour/highlight duo, with a bronzer on one side and a highlighter at the other. The highlighter comes in two shades, #PINK and #BEIGE. Since I don’t buy anything which has the words ‘beige’ or ‘basic’ on it, the one I have is in the shade hashtag pink.

Personally, I swatched the two in the store and there really isn’t all that much difference between them. They both look beige to me. The only difference I noticed was that #beige was much sparklier. So if you like some sparkle on your cheekbones, then get that one. I, for one, prefer a more subdued highlight.

Between the bronzer and the highlighter, the highlighter is probably easier for someone to like. The shimmer is subtle and isn’t chunky and in-yo-face like some gross tacky highlighters. I use a larger powder brush to apply it on top of my cheekbones and on the bridge of my nose, and I think it looks nice. Adds that extra luminosity to it.

I used to think wearing highlighter in Malaysia is like selling ice to the eskimos since our weather is so damn hot that most people would be ‘glowing’ within a few minutes out in the sun. But there really is a difference between sweat glow and highlighter glow. The latter is just so much classier looking, so long as you don’t apply too much as to look like a disco ball.

However, this is definitely more of a ‘real life’ highlighter and not an ‘Instagram’ highlighter. What do I mean by that? It means that unless you’re working with some Hollywood-studio level cameras, you’re not really going to be able to capture the effect of this highlighter in selfies. It just isn’t dramatic like that. But it is noticeable in real life– so if you’re the type who doesn’t usually wear highlighter like I do, someone is definitely going to comment that your skin and makeup looks extra nice today. 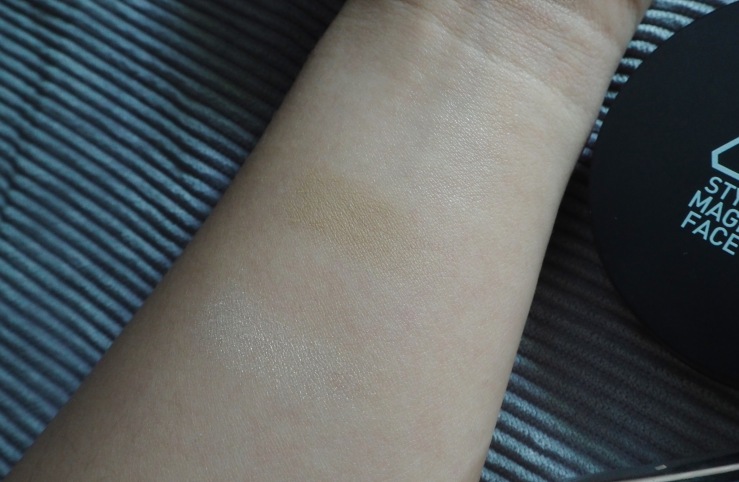 The best attempt at a swatch for these very subtle shades.

The BRONZER however, is a different ball game. I’m not even sure I should be calling it a bronzer, but then again 3CE isn’t calling it that either. I guess it would be categorised as a face shader, which is the Asian cosmetics buzzword for ‘contour’. I’ve only ever used Western bronzers for contouring before, so when I swatched this in the store I was definitely expecting a more pigmented, browny payoff. But that’s now what you get. At all. Like it literally only looks brown on the pan, it’s more of a taupe on your skin. It’s the kind of shade that Western makeup brands would put in their neutral eyeshadow palettes (a similar colour would be ‘Limit’ in the Urban Decay Naked 3 Palette— although it’s not an exact match).

But this isn’t all that uncommon in Korean cosmetics, I guess. From watching Pony makeup tutorials, I’ve noticed her using this kind of shade for contouring before– particularly for smaller areas like nose and eyelids. And although putting grey-ish taupes on your face might seem like the opposite to natural, it actually works. In fact it might actually work BETTER if your skin tone is light enough for this to show up on you.

One complaint that I’ve always had regarding bronzers is that it’s so muddy and deep that it kind of makes you look tired. I mean, isn’t contouring supposed to mimic shadows? Shadows aren’t brown. So this kind of taupe-y colour is actually a lot more natural, although it will absolutely not give you that intense, super-chiselled look. This particular product is not pigmented enough for that.

However, if you contour your nose— I usually don’t, but I know a lot of girls who do— this is DEFINITELY better for doing that than using a bronzer. I can always spot the bronzer stripes on the sides of the nose, but using the Face Maker allows you to give you just the right amount of definition without making you look like you’re taking a deep breath through your nostrils… Is that the way to describe it? Come on, I know you know what I’m talking about.

So to wrap things up, I do like this product— particularly the highlighter and for the nose-contouring thing I just told you about— but as an honest, discerning consumer I have to admit that I might just be forcing myself to like it more than I really do. I know, that sounds dumb but I KNOW I’m not alone in this sort of thinking. You like something more than you really do because you like the idea of that thing more than it actually performs.

But I’m not delusional enough to actually suggest this item to other people. It’s a cute item. It’s not terrible like the lip marker and crayon. BUT there are definitely other Korean or Japanese brands which produce similar or better items at half the price. I could probably find a cheaper dupe in Sasa. But their packaging usually sucks so idk.