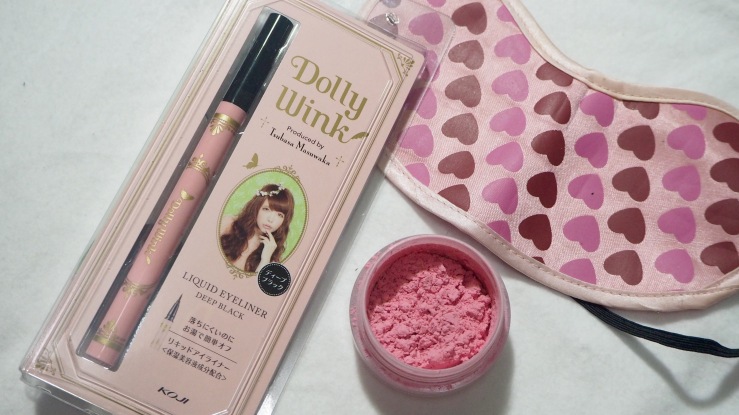 Dolly Wink is a brand that I associate with my embarrassing circle lens phase. Now, I have been through at least fifty embarrassing ‘phases’ throughout my life but the stage of my life where I wore colourful circle lenses is the one that makes me cringe the most (and that is A LOT coming from someone who went through a ‘socialist’ phase… heavy emphasis on the quotation marks). I had these green ones that I wore ALL THE TIME, thinking I was hot shit. Unfortunately for me my roommate wore them as well so I didn’t have anyone to tell me how dumb I looked. We used to sit around circlejerking about how GREAT circle lenses are, and how ugly our natural eyes looked without them.

Anywho, Dolly Wink came to Malaysia around that time. Actually, there was a whole flurry of Japanese brands landing on our shores at the time. A lot of them (like Candy Doll, which to me always came off like Dolly Wink’s hick cousin) appear to have been discontinued tho. But Dolly Wink has stuck around! And so, years after I got over my eye infection-inducing Japanese phase, I decided to give Dolly Wink Liquid Eyeliner a try.

The one I have is in the shade ‘Deep Black’. Check out the packaging. On the cover you have the gyarulicious Tsubasa Masuwaka, producer of the brand, planting insidious messages in your head that if you buy her product, you’ll look just like her!

Well, she’s not completely wrong, actually. On hindsight, the gyaru look (and I’m talking about the ‘traditional’ gyaru look that we associate with Japanese makeup trends… I am aware that the look evolves with time and ‘the look’ is probably totally different now) is kind of like an East Asian version of the current Western Instagram look. Like a very fill-in-the-blanks makeup style where everyone does the same makeup look, the same techniques, with the aim of looking like a very specific woman. Check out this old school gyaru makeup tutorial done by Frmheadtotoe which exemplifies the transformative quality of gyaru makeup. I used to LOVE this tutorial! And what do you know, she actually uses Dolly Wink eyeliner in it.

So back on topic. Regardless of how gyaru or not gyaru the brand is, I can usually trust that Asian brands, particularly Japanese ones, are able to give me the best quality eyeliners and mascaras. Bookmark me on this. Asian drugstore eyeliners = Western mid-range and above eyeliners, at HALF the price. And Dolly Wink’s liquid eyeliner is not an exception. I like the nib of a pen to be as fine as it can possibly be, because due to the shape of my eyes I have to keep my lines nice and thin.

This eyeliner is SO fine that I had trouble getting my camera to focus on it. The tip of it is basically about as fine as a piece of hair.

Anyway, sometimes when a liquid eyeliner promises a ‘deep black’, what you get instead is more like a grey. An example can be seen in Eyeko’s Skinny Liquid Eyeliner which promises a ‘colour intense’ finish but is very much not. In comparison, when Dolly Wink says ‘black’ they really mean ‘black’. Blacker than coal. Blacker than every beauty blogger who reviews black makeup product’s soul. And you don’t even have to press hard to get the payoff! Even with the hair-thin nib of this eyeliner, just a touch is enough to produce a pitch-black line.

A downside to that is that it’s easy to make a mistake, especially if you’re an eyeliner rookie. I always have a bit of trouble with new eyeliners, and I’ve found that it’s easy to mess up your lines. No worries, however, because this eyeliner is really easy to remove. It’s the type which flakes, therefore you can just rub it off with your finger (without even any makeup remover!) and it will come off just like that, without smudging and getting black all over your face. That, however, also has a downside– the eyeliner has a tendency to come off on your eyelash curler if you don’t give it enough time to ‘set’. So do the rest of your makeup first before finishing off your eyes.

Once it’s set properly, it will stay exactly where it is for the entire day. No smudging, no flaking. You can even nap with it on– it will not be going anywhere. And when you’re ready to remove it at the end of the day? I always use baby oil, because I want to take off my mascara as well, but I’ve found that just warm water is enough to take this eyeliner off. And, like I said, it just flakes off instead of smudging, so removal is absolutely easy and non-messy.

So the verdict? I’d say this is a pretty great eyeliner. Other than the eyelash curler issue, I don’t see how it can get better than this and you’d be hard pressed to convince me that there’s some high end brand out there that’s ‘better’. Things like eyeshadow, foundation and concealer I think is always up for improvement but eyeliner? As long as it’s dark, enough, stays on when you want it and comes off easily when you want it, then you’ve reached the apex of a ‘good eyeliner’. Once you’ve reached that certain level of ‘good’, paying extra isn’t going to get you something better– because it cannot get better.

But you know, I’m still going to try the Kat Von D Tattoo Eyeliner sometime in the near future. Because… idk, something is telling me that she deserves my money.

Dolly Wink Koji Liquid Eyeliner is available in all Sasa stores for RM58!