Now that I’ve finally gotten myself a Spotify Premium account, music has once again become something which is actively part of my life (the way it was when I was thirteen) rather than just background noise the way it was for the past couple of years. One of the best investments I’ve ever made, btw. I listen to a lot more independent artists now and am discovering some of the best songs I’ve ever heard. At the risk of sounding pretentious, having so much music becoming easily accessible to me has made me a lot more selective towards what I choose to listen to. Why continue to fill my ears with payola-d, radio trash when there’s so much better stuff available? (In other words, I’ve become one of those people who reply to comments on Youtube about new music sucking with: “Good music still exists!! You just have to look for it!!”)

While I look for new music, I’ve also been reunited with older music that I used to love when I was younger and get to judge them with more grown up ears. Honestly, most of them are objectively pretty bad (I mean, I will still go HAM when 3OH!3’s Starstrukk comes on but you have to admit that it’s hard to defend it as being anything other than a pretty terrible song) but there are also some which I actually end up liking a lot more now compared to how I felt about it when they were new (I would say the R’n’B era was a great one. Honestly, I’d sacrifice every EDM DJ currently on the airwaves for Toni Braxton to have a big comeback).

One of the ways I measure whether a certain song or album is something I truly love and isn’t just something with a nice beat that I enjoy hearing is if it’s capable of bringing me into its world. Is it weird to say that I think some songs have aesthetics? A bland but enjoyable song is just that—something you hear—but a really good song is capable of making you envision things. These ‘things’ include makeup. So since this is supposed to be a makeup blog and not just a personal blog, let me talk about two albums that I really love and talk about what kind of makeup and aesthetics it brings to my mind.

When someone says the word ‘superstar’, I think of Britney. So Miss Spears may have gone a bit below the radar in the past couple of years, but if you ask me no pop star has managed to reach the heights, the flat out everybody-knows-her-name superstardom that she did during her heyday. Probably only Madonna and Michael Jackson can reasonably make a claim to that but I didn’t live through their eras so I can’t give first-hand knowledge on the lengths of their fame. But what other pop star is so, well, iconic that she can have a Fairly Odd Parents character named and modeled after her??? (truly the most accurate measure of fame)

Anyway, Britney’s best albums are usually said to be Blackout or In The Zone but my personal favourite is her 2001 self-titled album Britney. Can you believe she was only 20 when this came out? Actually, can you believe this album is 16 years old?—nearly old enough to drive and definitely old enough to smoke weed. This album is truly nostalgic to me since we used to play it in the car when I was a kid but it’s not just nostalgia which makes me like it so much (we also had Oops! I Did It Again and In The Zone, but I don’t rate those so highly these days). This album is just so… cool to me. I mean, first of all it has I’m A Slave 4 U which is pretty much Britney’s best song in my books (better than Toxic) but other than that it just has such an effortless and timeless vibe to it which is missing from a lot of early-2000s pop music which tend to be total cheesefests (listen to any Jessica Simpson song, for example). In contrast, a lot of pop music these days are too focused on giving us I-didn’t-even-try which they confuse for effortlessness since, unlike during Britney’s heyday, trying too hard (or at all) is out of style. That’s why we don’t see complicated choreography (ala Britney’s Me Against The Music) or fun, storytelling music videos (like Britney’s Lucky) anymore. It’s nice for now but it feels cold and doesn’t really help you form an attachment to the music you’re hearing. No wonder the music industry is struggling to create a new generation of superstars!

Anyway, I mentioned the word ‘cool’ to describe this album. Maybe it’s the blue on the cover, but this album generally makes me think of being in a very cold place (which is weird since the lead single of the album featured a video set in a heatwave). So I think of black kohl eyeliner, all smudgy from cold-induced tears (actually this is the look that Britney used to sport a lot in those days) and, like, reddened cheeks as if you’ve been stuck in the snow for a while and finally found sanctuary.

For the eyeliner, Zoeva Graphic Eyes Waterproof Eyeliner in Black to Earth will give you all the smudginess you need. If you’re just trying to give your eyes some definition, this product is not it—it is extremely creamy and will only work if you smudge it. It’s so creamy that sometimes I even run an angled brush on the tip and use it as a gel eyeliner instead. For it’s-so-cold red cheeks, of course I’m going to recommend a Korean product—Etude House Dear Darling Tint is ideal. It takes a bit longer than I’d like for it to dry down, but when it does it stays on (which is a gripe I usually have with lip tints since they tend to last for all of two seconds). Plus it’s so cheap.

Favourite track: When I Found You

I refuse to accept that we live in a world where pop punk isn’t played on the radio yet… some other songs are. This must be Satan’s doing. Anyway, although Billie Joe Armstrong doesn’t like the term ‘pop punk’, this is pretty much the pop punk album. If we’re talking strictly the mainstream, then it’s the first of its kind. It isn’t my first or favourite Green Day album (that would be American Idiot, which also inspires me but is kind of played out to talk about) and in fact when I first received it as a gift in 2006 I really didn’t think all that much of it. I mean I definitely enjoyed it and understood that it was Green Day’s breakthrough and is considered An Important Album but I guess its Gen X, DIY punk vibe was too different from the flat-ironed, skinny-jeaned scenecore thing that I was into at the time. I don’t know if it’s the whole 90s-revival thing we’ve been having lately or if its my ability to finally appreciate things that were before my time, but I’m now totally in love with everything about this album: from the hand drawn artwork that is reminiscent of what you might see on a flyer to a Gilman St show in 1991 to Billie Joe Armstrong’s bratty, nasally ‘Englishman impersonating an American impersonating an Englishman’ voice.

When we think pop punk, we tend to think of backwards caps and baggy pants but that’s more late 90s-early 2000s, leaning more towards Blink-182 (after punk had completely 100% been commercialised and taken over by the non-working class). Dookie came out smack right in the middle of the 90s, at the tail end of the grunge era so fashion-wise you’d see Billie and company still having some shreds of grunge influence to their clothing but with a slight California sk8er boi twist. Still very unkempt, but with a big dose of playfulness to replace grunge’s torment. 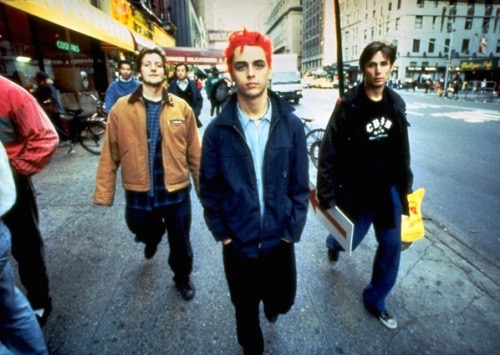 I always say that Avril Lavigne’s marketing team really knew what they were doing when they were crafting her ‘punk princess’ persona, and she played it to a Tee as well (all the people that were complaining that she was nothing like, say, Sid Vicious or Joan Jett were mistaken. The ‘punk’ that Avril and her team were referring to were clearly the 90s-2000s incarnation of the term) but these days I think that she might have been wearing a little too much eyeliner. As annoying as it is that I keep using this term, ‘effortless’ once again comes into play. But compared to Britney’s effortless cool, Dookie is just straight up… literally did not try. Not because it isn’t cool to try, but just because trying takes too much effort and you’re too apathetic to care.

So to have a truly accurate, if-Dookie-was-a-human pop punk princess, she probably wouldn’t have worn any makeup. But to keep things interesting, I could envision some cheap, drugstore lip gloss on her. Or if we want to keep things Totally Nineties, some brown lipstick—Urban Decay’s 1993 (that I’ve already talked about) would be a good one. No foundation, but sunkissed from being outdoors skateboarding under the California sun all the time. Glossier’s Cloud Paint in Dusk would be a good one for that. I personally don’t rate it as a blush (unless you’re VERY pale) but I almost use it as a liquid bronzer: all over the tops of my cheeks and even on the bridge of my nose, in order to achieve that slight ‘sunburnt’ look. If you have freckles it would be even cuter. And that’s pretty much it. Skinny brows, or very natural ones. No discernible eye makeup. Basically, Drew Barrymore in this picture:

Honestly, there are a lot more albums that I could include in here (and individual songs, too) but this is long enough already so I’ll keep it to just these two. Maybe give the albums a listen, or at least just the favourite tracks I mentioned (preferably on Spotify or Apple Music, so that my faves can get some coins).