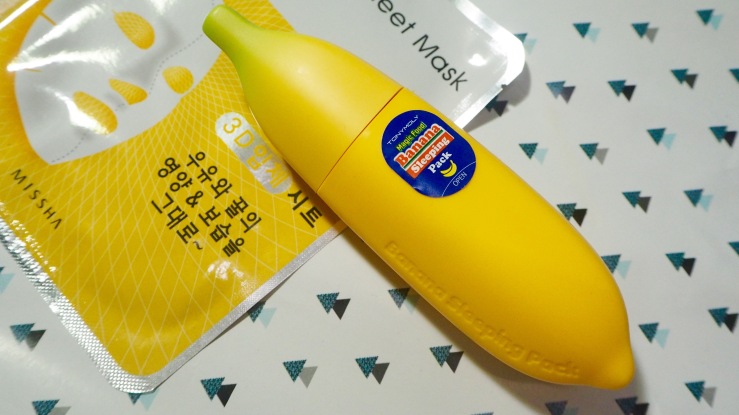 I’ve only just been done with my final exams for about a week now and I still haven’t fully recovered. This is because for the last month and a half I’ve been waking up in a cold sweat, immediately panicking over whether I’d learned enough or did I have to do another ten past year papers or???? I couldn’t go ten minutes without studying or else I’d feel guilty– this includes taking time off for lunch or dinner.

Obviously, this is not a healthy way to live.

In that one and a half month of torture, however, I managed to scrimp together a few things that still brought me some form of lightness and joy. One of them is the Tony Moly Magic Food Banana Sleeping Pack.

You know I love me some Asian skincare but as delusional as I am, even I am aware that not all of it is good. Now, while a lot of Western blogs squeee over the cuteness of Asian beauty products, in my eyes the more cutesy a product is, the less likely it is to work. Especially when it comes to skincare.

Therefore it was only when I saw a few raves about this sleeping pack on /r/AsianBeauty that I decided to give this a try. As I probably mention in every single one of my posts on this blog: I have dry skin. Add that to the fact that I sleep with my air conditioner on in full blast every single night and you have a recipe for disaster. I already use heavier moisturisers for night time (right now I alternate between Vanicream and my Guerisson Horse Oil Cream) but I find that using that alone isn’t enough. I used to be a loyal user of Tarte Marajuca Oil as an extra moisturising boost but I got bored of tolerating the heavy oily feeling so I’ve been trying out sleeping packs instead.

The highly-raved about Laneige Water Sleeping Mask did absolutely zilch for me, as did the Innisfree Green Tea Seed Sleeping Pack (also highly raved on the aforementioned subreddit– however, their Green Tea Seed Serum is a staple in my routine, it rocks). So I kind of gave up on sleeping masks for a while until I came across a Tony Moly kiosk and, recalling that their banana sleeping mask was popular, decided to check it out.

When they say ‘Banana’, they really mean it. This thing reeks of banana which absolutely turned me off at first. But I changed my mind. And I’m glad, because for the first time in my life I get to agree with the good folks of /r/AsianBeauty on the merits of a sleeping pack!

Unlike both the Laneige and Innisfree sleeping packs I mentioned, this one has a much heavier/creamier texture as opposed to a gel one. Because of that I find that I don’t need to apply a lot at all– I squeeze it out on the tip of my finger and that is enough to cover up my whole face. Unlike the Tarte oil, this doesn’t sit uncomfortably on my face throughout the night but absorbs quickly, which is important for me as not only do I hate the feeling of it just sitting on my face all night but I also hate the thought of all that expensive product being wiped off and wasted on my pillows.

I saw the results of this product the first day I used it– my skin looked plumper and definitely felt a lot softer and more hydrated. It def wasn’t a placebo effect either since I’ve been using it for like a month now and it’s consistently delivered. I wouldn’t say it has any brightening effect or is capable of reducing redness (and it obviously wouldn’t be much help for acne) but if you’re someone who suffers a lot over dehydrated, flaky skin or has to spend a lot of time in good-for-your-emotional-wellbeing-but-bad-for-your-skin air conditioning… then this one might be for you.

One thing I don’t like about this, though– this packaging is so annoying! I mean, I guess it’s cute and all that it’s a banana but… why? I mean, I’m not even super against cutesy, gimmicky packaging but it still has to be at least somewhat functional. Since it’s a banana, it wouldn’t be able to stand up so you have to kind of… just leave it lying around. If it was a tomato or an apple things would be a lot easier. As it is, unless I’m willing to buy a stand just for this product, there is no way I’ll be able to store this in a way that is #aesthetics and in harmony with the rest of my skincare collection.

Heh, first world problems indeed. (Except I don’t actually live in the ‘first world’– but wait until 2020 rolls around! Malaysia is coming to snatch your weave! ………maybe)

You can get the very magical Tony Moly Magic Food Banana Sleeping Pack for RM74 at all Tony Moly stores!

Speaking of bananas, did you know that the scent and flavour of artificial banana is based upon the taste/smell of the now-extinct Gros Michel banana? Up until the 1950s, the Gros Michel banana (aka ‘Big Mike’, which sounds like the bassist of a 1990’s ska band) was the common banana that everyone bought and ate… until a banana virus hit and all the Big Mikes died and became extinct (tragedy!). Since then, we’ve been sustaining ourselves with the Cavendish banana which is a sad, inferior, watered down, broke version of the Big Mike.

What makes this story even more interesting to me is that while Big Mike is extinct in most parts of the world, it is actually still alive and kicking here in Malaysia! That’s right, the Gros Michel banana lives on in this very country under its local name of Pisang Ambon— in fact, I just ate some a few weeks ago and yes it is way superior to the Cavendish. So if you’re DYING to try this amazing, rare, elusive chanteuse banana… gather your coins and come to Malaysia!!!

Note: the government is not paying me for this… although they should be.